1897 - 1920
The Klett Group's origins can be traced back to the year 1897. It was then that Ernst Klett (Sr.) took over the Königliche Hofbuchdruckerei zu Gutenberg, a royal printing press that had already been in operation for more than 50 years. At the time, Klett's endeavours centred on this printing works, an affiliated billposting institute, and a small publishing house specialised in musicology. The company has been family-owned ever since.

With an eye towards setting up new, more modern printing machines, the young firm moved into a new building at Rotebühlstraße 77 in Stuttgart in the spring of 1900, which remains its headquarters to this day.

1921-1935
The 1920s saw Klett publish its first schoolbooks for the Württemberg region of southwest Germany. Fritz Klett also joined the company in 1921. Along with his father, Ernst Klett (Sr.), he succeeded in expanding its publishing and delivery operations and developing its print shop into a prosperous midsize organisation.

Ernst and Fritz Klett also managed to guide the company through the extreme inflation that followed the First World War in Germany.

1936 - 1944
In 1936, Ernst Klett (Jr.) began working at the company with a primary focus on its publishing business. Klett also turned part of its attention from musicology to fiction and non-fiction. While most of its publishing activities were put on hold during the Second World War, the company's facilities on Rotebühlstraße were largely spared by the conflict.

The decision to make some small changes to the publishing house our father had founded in 1936 and make it a bit more professional didn’t take more than a few minutes.
Michael Klett, 2002

1969 - 1989
In 1969, Michael Klett – the eldest son of Ernst Klett (Jr.) – became a company partner and a member of its management board. He would go on to direct its publishing house in 1976. Michael's younger brother, Thomas, joined him on the board and as a partner in 1973. Representing the third generation of Klett management, they overcame one of the first crises faced by the company's printing division, as well as a decline in the number of students in Germany. This was what prompted Klett to expand in the 1970s and ‘80s through acquisitions (of the Axel Andersson Akademie, for example, which is now the Hamburger Akademie für Fernstudien), holdings (in the Friedrich Verlag and Esslinger Verlag publishing houses), and the foundation of new companies (such as PONS). It thus evolved into a corporate group spanning a diverse range of business areas. The publishing partnership Klett-Cotta then began bolstering the group's efforts in fiction in 1977. The Klett Group would eventually give up the traditional core of its business – its print shop – in 1989. 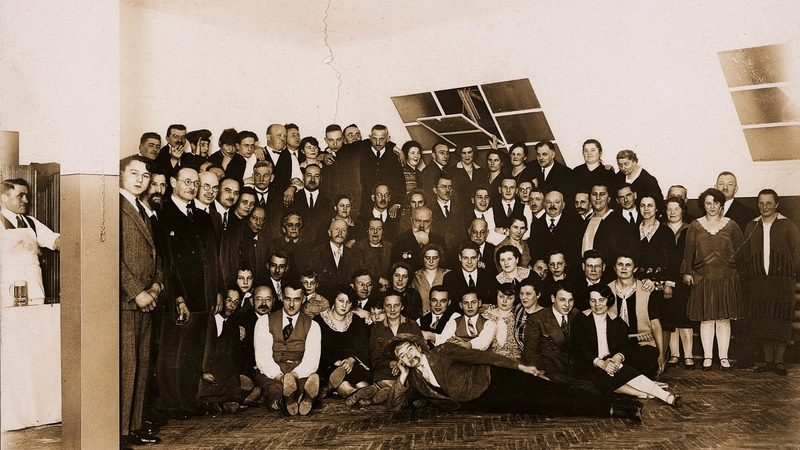 Klett employees pictured at a company party in 1925. Klett is among the first organisations to take an interest in its workforce's social concerns. In 1923, it creates an aid fund to provide pension payments and other assistance to employees in need. 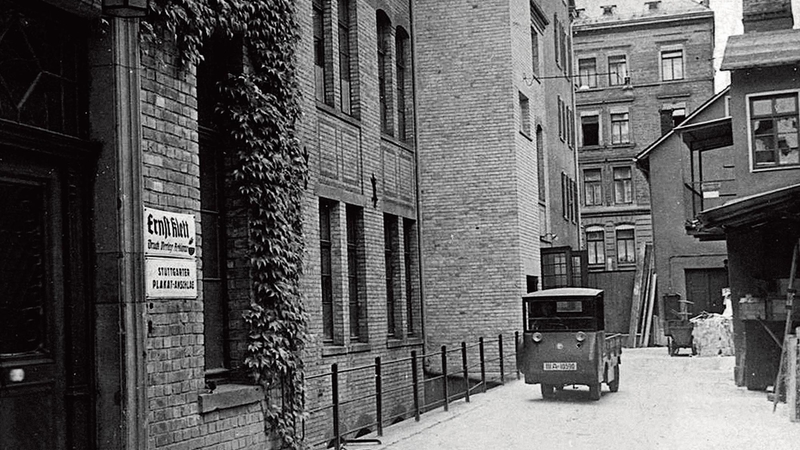 Klett's main facility at Rotebühlstraße 77 (Stuttgart) in the 1930s. Its print shop, which also accounts for most of the company's business at this time, takes up the lion’s share of the building. In fact, only a few rooms are left over for Klett's publishing activities. During their breaks, employees often play football in the courtyard. 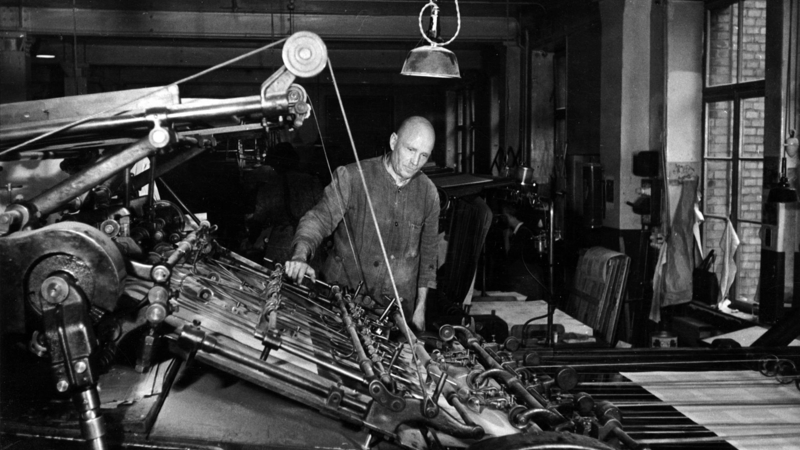 Following the Second World War, Klett receives a printing and publishing licence in November 1945. As this glimpse of the Klett print shop's expansive machine room (1951) shows, this enables the company to get back to work and make a number of modernisations in both areas. 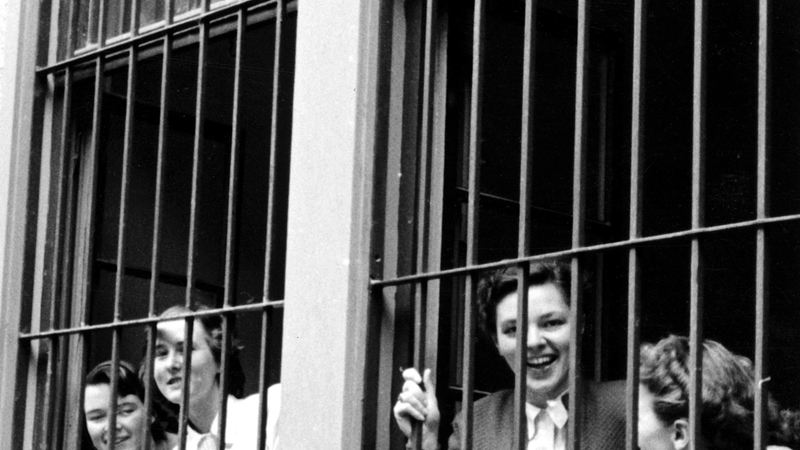 During their lunch break, employees of Klett's textbook publishing house observe the building work under way on the company's premises in 1951. Along with Klett’s general publishing house (which focused on fiction, non-fiction, and psychoanalysis), it is primarily the company's newly established textbook department that continues to draw attention away from its printing activities throughout the 1950s. 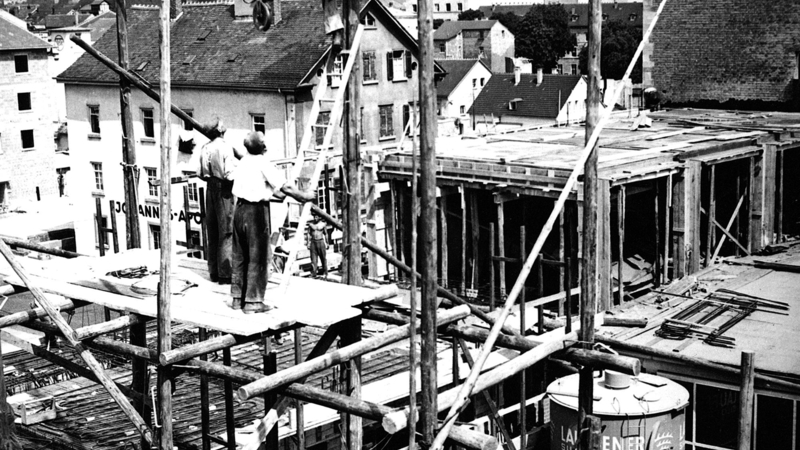 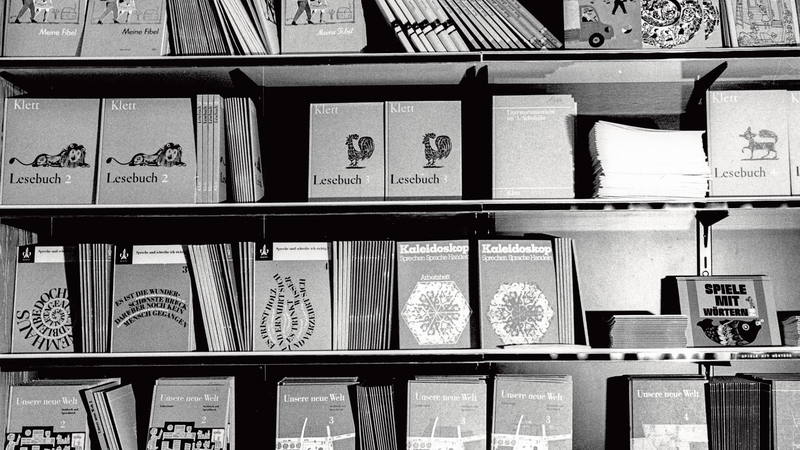 After seeing its publishing house overtake its print shop in terms of its importance during the 1970s, Klett bids farewell to a traditional core of its business in 1989. The primers, storybooks, and German and foreign-language textbooks produced by the publishing house remain popular among collectors.

1990 - 1999
In 1990, Ernst Klett Verlag Leipzig became the first branch of a West German publishing house to begin operating in the former East Germany. The transformation of Ernst Klett GmbH & Co. KG (which had been established in 1992) into a publicly traded company in 1995 then ushered in an effort to restructure its business areas and acquire stakes in additional organisations. The 1990s also saw the Klett Group increase its activities outside of Germany, including in Switzerland, Austria, Spain, Poland, Romania, Bulgaria, the Czech Republic, Hungary, Slovakia, the former Yugoslavia, and France. In addition, it founded the company Deutsche Weiterbildungsgesellschaft (DWG) as a framework for building and expanding its distance-learning schools and universities.

2000 - today
The first decade of the 21st century was marked by considerable growth. The foundation of the Hamburg distance-learning university Europäische Fernhochschule (2001) and the healthcare-focused Apollon Hochschule der Gesundheitswirtschaft (2005) represented milestones in Klett's targeted effort to build its business in adult and continuing education. The group's distance-learning schools and universities along with its attendance-based universities have made it the leading private provider of continuing education in the German-speaking market. For 10 years now, attendance-based learning facilities ranging from crèches to secondary schools have also been rounding out the Klett Group's services and furthering its evolution into a diversified education company.

The Klett Group employs cookies from Matomo (formerly Piwik) to optimise the use of this website for visitors. The information generated in this way will not be passed on to third parties. I agree to this data processing.
Further Information